Why CelebrityTypes Sucks at Typing: Eminem

You might be familiar with CelebrityTypes. In case you aren't, they are a website whose owners pride themselves on "determining" celebrities' MBTI types and providing no explanation.

What can you do about this? Well, not much, because the admins there seem to get a little butt-hurt when people disagree with them. You can, however, read this post where I correctly type our celebrity victim, after which you will wonder why the hell you ever took that site seriously in the first place. And yes, of course this is fucking important. Lying on the internet is a crime.

Update 1/29/15: They changed it! Finally! And they didn't get my fucking last initial right in the hat tip. Whatever... This is an awesome post so it's staying. 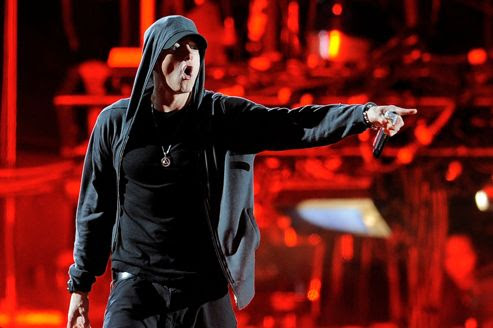 CelebrityTypes lists Eminem as an ISFP. Now let me copy-paste you a little description of ISFP, and you tell me if this rings a bell:

[ISFPs] are gentle, modest and reserved persons. They cope well with everyday life and like their privacy. With their quiet, optimistic nature, they are also good, sought-after listeners and other people feel well in their company. All in all, this type is the most likeable and friendliest of all personality types. Tolerance and [their] regard for others distinguish their personality. They are very caring, generous and always willing to help. They are open to and interested in everything that is new or unknown to them. However, if their inner value system or their sense of justice is hurt, Sensitive Doers can suddenly and surprisingly become forceful and assertive. source

"Gentle, modest, and reserved." Too easy, but fuck it:

Two to the one, from the one, to the three/I like good pussy and I like good trees/Smoke so much weed you wouldn't believe/And I get more ass than a toilet seat

Alright, let's give CT the benefit of the doubt and pretend Eminem is a little "special" in terms of expressing his values. ISFP's first function is Fi, which is, in a nutshell, one's personal belief system unencumbered by what society prefers. A.k.a., values. Now kids, what value can we name that is a recurrent them in Eminem's songs? Anger? Satire? Wordplay? No, see these are not values. One is an emotion (note: (F)eeling != emotions; everyone has emotions), and the other two are just ways to write a song. Or something. I don't know, whatever you classify them as though, they aren't values. Compare his lyrics to The Colbert Show. How did I link these two together? Aside from the satire, Stephen Colbert also happens to be an ENTP. ISTP and ENTP share two functions in common, the important one being Ti. Ti is deductive. Its purpose is to pull things apart logically and get to their core essence. It often manifests itself as satire or making fun of things. What does Eminem do in his songs? He makes fun of the music industry ("Shake That"), himself ("The Real Slim Shady"), society ("Role Model")... you get the picture. Now maybe you could argue that he values making fun of stuff. I'd say that's a bit of a stretch, and if we accept that argument, we have to reconsider every ENTP comedian's type. And there are many of them. 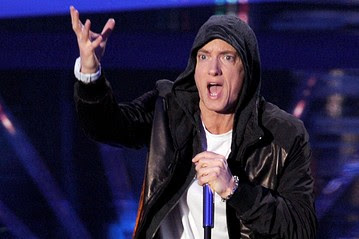 Going back to the quote: They cope well with everyday life and like their privacy. With their quiet, optimistic nature, they are also good, sought-after listeners and other people feel well in their company. All in all, this type is the most likeable and friendliest of all personality types. Tolerance and [their] regard for others... Let me stop you right there. I will reiterate, this is allegedly a description of Eminem. The rapper. The one who has a history of poor coping skills, who expresses anger (either actively or passively through sarcasm) in most of his songs, who picks fights with people for fun. Now I know people can be paradoxical, but... um, I'm just trying to picture how on earth an ISFP could take on this form. Granted, Eminem has been through some shit, but being in touch with your feelings does not make you a Feeler. As far as I can tell, that is the only argument CT has for Eminem being an ISFP, since the only fucking reasoning they provide is two quotes from him talking about his feelings. 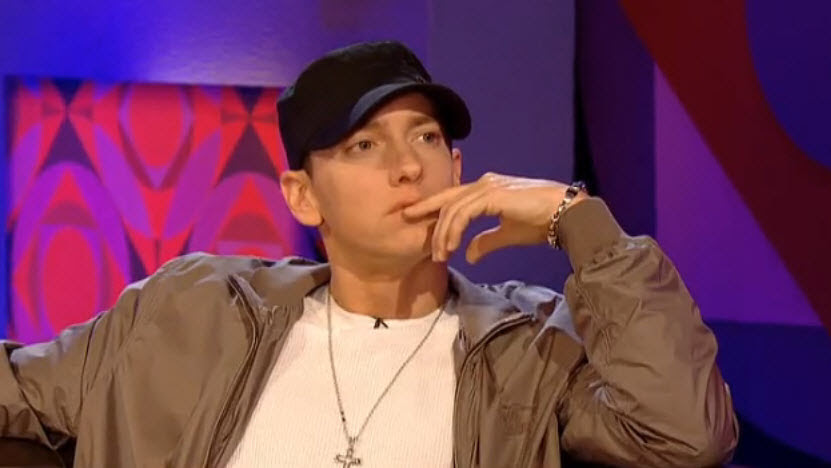 So. Now that we have not-ISFP out of the way, I will tell you why he is ISTP.

Let's start with another description:

ISTPs have a compelling drive to understand the way things work. They're good at logical analysis, and like to use it on practical concerns. They typically have strong powers of reasoning, although they're not interested in theories or concepts unless they can see a practical application. They like to take things apart and see the way they work. source

Now, take this description, memorize it, and go here. Lazy? Fine, here are the things you need to know. Yes, more quotes:

Anderson Cooper asks [Eminem] to explain what he means by ‘bending the words’, to which Eminem responds:
“Just the enunciation of it. People say that the word orange doesn’t rhyme with anything and that kind of pisses me of because I can think of a lot of things that rhyme with orange.”
Anderson Cooper continues, what rhymes with orange?
Eminem responds:
“If you’re taking the word at face value, and you say orange. Nothing is going to rhyme with it exactly. If you enunciate it and make it more than one syllable, you can say like: I put my orange-forange-storinge-in storage-in a pourage.”
Eminem continues:
“You just have to figure out the science to breaking down words.”
Eminem says that he thinks about word rhymes throughout the day and drives himself insane with it.
Anderson Cooper mentions and that he heard that Eminem used to read the dictionary. Eminem says he did for a very particular reason:
“I just felt like I wanted to be able to have these words at my disposal in my vocabulary at all times whenever I need to pull them out. Somewhere they’ll be stored like locked away.
He then pulls out a box where he stores scraps of paper with words and phrases he’s written.”
Now, I'm not gonna go into another function description here because you can look that shit up yourself, but basically this is Ti at work. Breaking things down to their bare essentials and forming logical conclusions from there, then applying those conclusions broadly using whichever perceiving function you have. In this case, for Eminem, it is Se (extraverted Sensing), so he is focused on how the words sound rather than what they mean. See: the part about the orange. And see that part about him driving himself insane with it all day? That is because Ti is his dominant function. As in, his first function, the one he filters all of the world through and uses all of the time, always, forever.

[ISTPs] do not believe in or follow rules and regulations, as this would prohibit their ability to "do their own thing". [...] ISTPs are loyal to their causes and beliefs, and are firm believers that people should be treated with equity and fairness. Although they do not respect the rules of the "System", they follow their own rules and guidelines for behavior faithfully. They will not take part in something which violates their personal laws.

The combo of Ti and Se makes for a particularly rebellious personality. Ti, as I've said, forms its own logical conclusions, and Se, while commonly described as taking in things literally through your senses, is also about power over your environment. Being able to manipulate it. So, compared to the ISFP description, do you think this might be a little bit closer to all that is Eminem? Yes. The answer is yes. Say it with me: I-S-T-P. Also notice the part about loyalty to causes and beliefs. I said above that Fi = a belief system. Ti, in a way, is also a belief system. However, it is a logic-based belief system. See this is where MBTI gets tricky, because once you break down the definitions of functions far enough, they seem to disintegrate into each other. Ti and Fi are both internal judging functions. The difference is, Fi makes judgment calls based on their ideals. Ti makes them based on whichever path gets them from A to B without taking any logical detours.

An ISTP who is over-stressed may exhibit rash emotional outbursts of anger, or on the other extreme may be overwhelmed by emotions and feelings which they feel compelled to share with people (often inappropriately). An ISTP who is down on themself will foray into the world of value judgments - a place which is not natural for the ISTP - and judge themself by their inability to perform some task. They will then approach the task in a grim emotional state, expecting the worst.

Ding ding ding! We have a winner! This is the work of inferior Fe, or extroverted Feeling. Do I even need to elaborate on this part? No? Alright. So, now that we have established Eminem is an ISTP, let's get on with a bunch of random fucking quotes like they do at CelebrityTypes and call it a day: 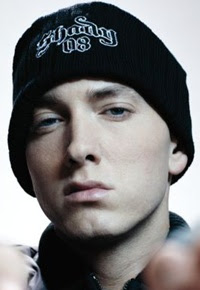 "Trust is hard to come by. That's why my circle is small and tight. I'm kind of funny about making new friends."
"A lot of truth is said in jest."
"Say there's a white kid who [...] is pretty much having everything handed to him on a platter - for him to pick up a rap tape is incredible to me, because what that's saying is that he's living a fantasy life of rebellion."
"To the people I forgot, you weren't on my mind for some reason and you probably don't deserve any thanks anyway."
"I do say things that I think will shock people. But I don't do things to shock people. [...] I don't know how long I'm going to be on this planet. So while I'm here, I might as well make the most of it."
"If there's not drama and negativity in my life, all my songs will be really wack and boring or something."
"I don't think I've ever read poetry, ever. I'm not really book-smart."
"A lot of my rhymes are just to get chuckles out of people. Anybody with half a brain is going to be able to tell when I'm joking and when I'm serious."
"There was certainly, like, a rebellious, like, youthful rage in me."
"Being a student of hip-hop in general, you take technical aspects from places. You may take a rhyme pattern or flow from Big Daddy Kane or Kool G Rap." source
Posted by Krissie at 5:43 PM